The Butcher of Tiananmen Square

This story, thanks to Gerry Greeve, is a colorful perspective on introducing Intel to China. It describes early forays by intel executives into China when Premier Zhao was in charge and meeting with then Vice Premier Li Peng and a lecture by Gordon Moore at Tsinghua university. A few years later things changed and, resulting in the incident at Tiananmen Square and we are advised that things are not always what they first appear to be.

The Butcher of Tiananmen Square 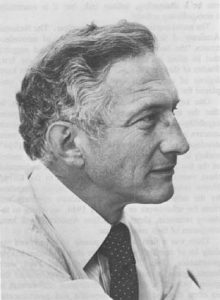 Bob Noyce had been the first senior leader of Intel to go to China. He had gone there in late 1982 and met with Deng Xiaoping. In about August 1983 Hank O’Hara, then Vice President of Sales for Intel, went to Beijing and met with Premier Zhao. China was anxious to do a deal with us, which would get them more microprocessor technology fast. Zhao had chided Hank with an admonishment that went something like this: “Why have you Intel people done nothing with China? We have asked your Chairman to propose a deal for us to work together yet no one has done anything”.

Well Hank came back and talked to Bill Lattin who called me into his trailer. Bill said something like “Look Greeve the Chinese are all in a dither and you and your guys have got to put together some type of technology transfer deal. There’s been lots of talk but no results and you’re going to have to change all that”!

Well to make a long story short, a bunch of people joined me and we pulled together Intel’s first proposal for a business relationship with the People’s Republic of China. Our proposal was we would transfer computer hardware and software technology and training to the computer-engineering department of the Aviation Ministry in return for them purchasing tens of millions of dollars of single board computers. In February 1984, four guys, Francis Yu, Chris Lingle,

Mike Kemple, and I flew up to Beijing and negotiated the deal and the final watershed agreement with their Import/Export arm CATIC was done by the spring. So as the wheels of that deal

started to turn it was time for the ceremony. Of the Intel “office of the president” only Bob Noyce had been to China and so in early 1985 I helped Francis Yu organize a visit for Gordon Moore, then Intel’s President and his wife Betty. It was largely ceremonial with tours of factories, speeches to technology associations and ministry leadership, and a public resigning of the agreement. Of course we ate our way through the trip with one memorable feast after another. There are a number of lake parks just west and north of the Forbidden City which are fun to stroll through – we had a small luncheon banquet in an ancient building for about 30 Intel and PRC leaders there – delicious. But the high point of the ceremonies was to be a “state meeting” where Gordon was to meet with the very powerful Vice Premier, Li Peng, who for a decade, starting a year or so after our visit, was the Premier of the PRC and head of its National Congree. 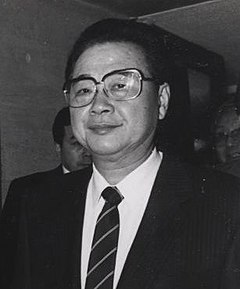 Vice Premier Li Peng I had to do the briefing for Gordon and in my research uncovered the fact that Vice Premier Li was the adopted son of Zhou En Lai. Li’s father, a member of the revolution, had been executed by the Kuomintang. During the “Long March” Zhou had given the six-year- old Li his blanket to keep him from freezing as they hid out in a cave in mountainous western China. So Li was destined for power in the seemingly, never ending incestuous realms of human politics. I had to come up with the ceremonial gift that, in Asia, is a required part of any meeting between leaders. Teeing off from the tale of the blanket I went to our Portland based Pendleton woolen mills and purchased a lovely American Indian patterned king sized blanket. Gordon raised an eyebrow when I told him what he was going to present but I convinced him with the cave story – and anyway, who doesn’t want a Pendleton blanket? 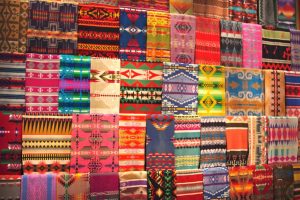 Pendleton Blankets There is a marvelous building near the Forbidden City which some nickname “The Chinese White-House”. It is called Zhongnanhai, which refers to the multiple lakes west of the palaces and the “imperial garden” in its midst…it now refers to the compound where the seat of power in China often resides and usually holds its most significant and power laden meetings. That was where our state meeting was to take place. Home of emperors and presidents, its history is palpable as you approach it in a limousine and, after disembarking, begin the walk to its majesty. The entrance to this compound is an enormous two story, carved wood, polychrome gate called “Xinhuamen”. 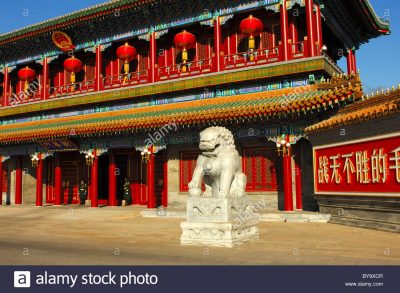 Its multiple eves sweep upward as wings. The gate entrance is flanked by large calligraphy signs with patriotic sayings and a couple of soldiers in full dress, and behind them, a massive gold written exhortation “Serve the People”. The theme is red and gold with sky blue accents under the handsome tiled roofs. Six of us walked through the gate into the courtyard with Gordon in the lead and turned left approaching the “Hall of Purple Light”, the most important meeting hall. There we took seats in luxurious upholstered chairs with side tables laden with porcelain tea utensils and steaming Longjing dragon well tea. I took in the carved screens

and silk paintings around the handsome room as the translated conversation between Gordon and Premier Li covered predictable ground. Then my turn came as I brought the blanket up to Gordon who presented it to Li. Their chatting was amiable, accompanied by occasional hand signs meaning tight collaboration, most of the talk merely confirming our commitments to work closely together. The whole thing lasted only 30 minutes and frankly I don’t recall any specific phrasing that was said. The ceremonial pictures were taken – all with film since it was 1985; mine are in some big box in Downtown Self Storage. As usual in China when its over its over, all shook hands and we left. Gordon led us to Tsinghua University where he gave a lecture on Moore’s Law. After another meeting or two the Intel party split up. Bill Clemow and I went to Jiao Tong University in Shanghai where I gave a lecture on Open Systems Theory. I recall looking out of the Sheraton windows and seeing block after block of the teeming city streets stacked with large bok choy cabbages sitting outside in the freezing cold. Gordon invited Francis and me to join him and Betty on a trip to Guilin and the Li River but I declined. 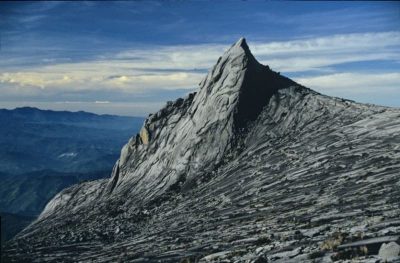 Mount Kinabalu, Borneo I was into high altitude trekking at that point and elected to fly to Kota Kinabalu in Borneo where I climbed Mt Kinabalu, which at about 13,500 feet is the tallest mountain in South East Asia. I regret now not going with Gordon and Francis. While I worked closely with Gordon on this and IBM, it would have been special to get to know him more personally. I was invited later to go fishing in Alaska with him but again declined and my good pal John Miner joined him instead. Anyway enough of that. In 1989, only four years after our meeting with Li Peng, the ten years of loosening the tight reign of the communist totalitarian state began

to give way to popular demands for even more freedom. Frustrations with corruption, unequal economic success, and suppression of free criticism resulted in an explosion of protest around the country. Beijing’s Tiananmen Square saw tens of thousands and sometimes a million people demonstrating for more freedoms. Riots, protests, and arrests broke out throughout the country. There was no agreement on response in the Politburo Standing Committee of Zhao, Li Peng and 3 others, much less with the “retired” paramount leader Deng, nor the Politburo as a whole. Li Peng was the fiery leader of the “crackdown” set. When Zhao left to take a trip to Korea, Li took charge of the country, coordinated with Deng and began pushing a hardline response. There was back and forth until in mid-May when hunger strikes, which had been underway for weeks, prompted response. The party leadership decided this was all a threat to order and their control so ordered a tougher crackdown. Martial law was declared and masses of troops dispatched to Beijing. On June 1 Li Peng issued a formal report to the Politburo calling the protestors terrorists and counterrevolutionaries. This report was the justification for military action. Zhao having been ousted, Li was now the senior member of the Standing Committee and with Deng decided it was time to clear the square with military force. On June 3, outside the 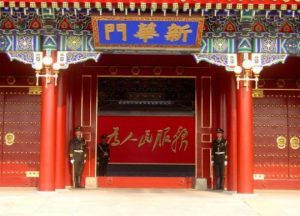 Xinhua Gate Xinhua gate of Zhongnanhai, where we had followed Gordon in for his state meeting, tear gas swept as the army and protesting students clashed. As the day proceeded the order was given by Li Peng to “use any means” and by late evening the army was killing people. The battle continued for the next 3 days as the army gradually exerted control. One estimate is 250,000 military occupied Beijing; there were dozens if not hundreds killed in other

cities; the leaders were eventually rounded up and hundreds imprisoned and executed. Amnesty International estimates that from several hundred to one thousand were killed. There is no consensus on the true reach of the crackdown but there is allusion to, country wide, millions being investigated and “tens if not hundreds of thousands” being jailed. Late in the summer of 1989 I saw Gordon and Betty at a garden party for Ed Gelbach’s 65th birthday. 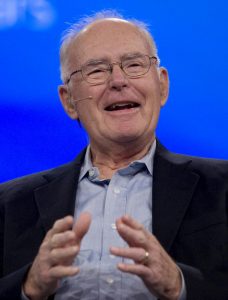 As I chatted with him I said, “Gordon, what did you think about your friend Li Peng and that crackdown in Tiananmen square”. “Gee”, Gordon said, “and he seemed like such a nice guy”. POSTSCRIPT: Oct 18, 2016 Speaking of incestuous politics, corrupt dynasty building, and our upcoming election…in flitting around cyberspace today I spied this in the venerable South China Morning Post: “Li Xiaoping, the governor of coal- rich Shanxi province and the son of former premier Li Peng, is tipped to become the new Communist Party boss of the regulator of top state- owned enterprises, sources in Shanxi and Beijing told the South China Morning Post.” I was surprised about 30 years ago to realize that progressivism leads, in some mentally twisted fashion, to powerful national governments which leads in turn to deeply seated nepotism…ugh.